REJOICE! The children are back in school.

For those who live to read…here are some awesome books provided by the incredible authors who wrote them. All in celebration of the new school year.

While a few of these books might be oldies, but goodies…others could be new and fresh off the presses.

Erotica is a genre of literature that includes sexually explicit details as a primary feature. Though the distinction might be blurred in modern works, erotica traditionally contains more sexual details than romance novels.

Please enjoy these books that focus on erotica and all its sub-genres. The list is available in alphabetically order by title.

Don’t forget to enter the Rafflecopter for a chance to win an Amazon Giftcard.

Gryff Ward made a serious mistake when he hired the hot-as-hell defense attorney Rayne Jordan as an associate in his high-profile legal firm, even though she’s one of the best. Now he’s struggling to keep it professional, especially when she insists on calling him “Boss.”

Rayne’s been attracted to the firm’s top attorney ever since her interview. And she’s well aware that calling the conservative man “Boss” drives him crazy…in a very good way.

Add Trey Holloway, their newest client, a troubled NFL quarterback, into the mix. Tension arises when it’s clear that both Gryff and Trey want Rayne and Gryff is willing to fight for her. However, Trey doesn’t hide the fact that he wants Gryff too.

Now Gryff’s having a hard time fighting not only his attraction to Rayne but to another man. Even though he stubbornly refuses to admit his deepest, darkest desires.

Then Rayne takes control. She’s determined to have them both in not only her bed but her life, and she won’t give up until she does.

Rarely do we get to pick our battles… Often, they choose us.

Single mom Mikaylah MacDonough and her only daughter Autumn have been on their own a long time. So, when Autumn goes off to school, it seems only natural for Kaylah to pull up stakes and follow, though with some clear-cut boundaries, of course. She’s determined to give Autumn space to enjoy the whole college experience but remain close enough for emergencies, meals and laundry. But when the closing date of the current house overlaps with taking possession of the ‘new’ house, along with orientation week, Autumn has to go it alone. From that moment on, Kaylah’s dreams of a new beginning turn into a complete and total nightmare.

When former serviceman Jerusalem Aames drives up to the century-old Cleary house, he sees dollar signs for himself and his all-veteran crew. The rundown, old place would finally put his fledgling construction-renovation firm in the black. But the moment he meets the gorgeous homeowner who had been duped into buying the money-pit, his attraction is swift and instantaneous.

However, there’s something very strange going on in the dilapidated house that has nothing to do with rotting timbers or shoddy wiring. Whatever it is, it’s affecting Kaylah’s state of mind, and Salem finds himself in a battle he’s not sure he can win.

Lacey Wilson is a lot of things. She’s beautiful. Sweet. A little sassy. And about to be divorced. Now, on the verge of turning thirty, she’s on a mission to find herself, both emotionally and sexually. No attachments. No baggage. No problems. But when her best friend convinces her to attend a private party, where masked men and women go to have a little anonymous fun, she finds herself staring into the eyes of the most incredible man she’s ever seen, and caution gets thrown to the wind. After all, what’s just one night?

Cameron Jennings likes to keep things simple. He helps out at his father’s garage during the day, then goes home to a few beers and TV. No muss, no fuss. Until one night when he’s working as the doorman at a private party, and meets her… Once he slips the purple mask over Lacey’s eyes and gets a taste of what she has to offer, he’s done for. With Lacey on a mission to rebuild her life, and Cameron completely infatuated, will she be able to convince him they could never have a real future after the way they met? Or will he prove her wrong?

Welcome to Shadow Valley where the Dirty Angels MC rule. Get ready to get Down & Dirty because this is Zak’s story…

After spending the last ten years in prison, Zak, former DAMC president, has a few priorities: to reconnect with his “brothers,” to get drunk, and to get laid. Not necessarily in that order. When he spots a stunning woman in the clubhouse and mistakes her for one of the club’s strippers, those priorities get a bit skewed.

Sophie has no idea what happened to her life. One minute she’s totally focused on building her bakery business, and the next? She’s delivering a cake to the Dirty Angels motorcycle club’s “homecoming” celebration for a member who just got out of prison. Little does she know baking that cake will change the rest of her life, not to mention, make her a target for a rival MC. Normally, Sophie wouldn’t be caught dead with a man like Zak, a tattooed, ex-con, badassed biker.

When a decades old territory war threatens to rip them apart, Zak will do anything to keep Sophie, his club, and the town safe. But being from two different worlds, the threat they’re under may not be worth the risk.

Note: This book can be read as a stand-alone and has an HEA ending.

Only Him (An Obsessed Novella) by Jeanne St. James

This is not just a love story, it’s an obsession…

Never in my life did I think my high school obsession would move right next door. I’ve never wanted anyone but him. Reid Turner is my ultimate fantasy. And I still want him. Badly. When he watches me through my bedroom window taking matters into my own hands, things suddenly take a turn…

And now that I have him, I’m not letting him go.

I never knew she existed and now I can’t get enough of her. She consumes me. When this night ends, there may not be anything left of me, she may own me completely. She my master and I her slave. In one way or another I will atone for never noticing her all throughout high school. I will gladly grovel at her feet to make up for what a fool I was.

Besides, who can turn down that luscious body of hers? Curves in all the right places, a mouth that could make a grown man cry, super responsive during sex, and none of my twisted desires so far have made her bat an eye. And did I mention? She lives right next door. She may be the perfect woman for me.

He was her addiction; she was his everything…

Emma Everly is ready for her happily ever after. James Shaw doesn’t know happiness. But Emma knows that there is more to the brilliant and sexy millionaire project developer. Yearning to experience the world of pleasure that James is offering her, with no strings and no future, Emma agrees to the parameters of his proposition. No love, just sex –and lots of it. After only one weekend, Emma feels her heart begin to bind to the man, and she knows she needs more, only James’ walls are up and he remains guarded and distant. He’s hiding something. As Emma falls hard and fast into his intoxicating world of sex and passion she fears that her own checkered past and James’ secrets may be what’s keeping their happily ever after just beyond their grasp. 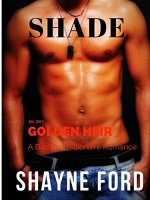 Tara is at a crossroad in her life and needs a man who knows how to appreciate her love. Shade inspires her to become the woman she is meant to be. In return, she gives him the love that he needs. Things seem to work out fine, but life throws obstacles in their way, not making it easy one bit.

Jasmine Teale will do anything for the sick kids she works for, including handcuffing herself to the security desk at Hope Towers – headquarters of the newly-arrived aliens. When a Jendari warrior decides to handle her demonstration personally, Jasmine realizes she’s in way over her head.

Tallis Ba’reah has no interest in the humans whose planet his people now share, and he’s done with the endless anti-alien protests. Until he confronts a soft, sexy, protest-of-one and he becomes far more interested than he should be.

Interspecies relationships are forbidden, and Tallis does his best to avoid temptation. But when Jasmine is put at risk because of her ties to him, he’s forced to admit his heart is in charge – not his head.

Tallis may not be able to claim her for his own, but he’ll do whatever it takes keep her safe.

3 comments on “Back 2 School: Erotic/Erotica”