Windswept Shores is a contemporary romance set in the Bahamas

The sole survivor of a plane crash, Megan is alone on a deserted island in the Bahamas. Then she finds a nearly-drowned man. Another survivor, this time from a boat wreck.
With only meager survival skill between them, will they survive these windswept shores and can they find love?
.

His hand lingered on her shoulder. Her trembling vibrated up his arm. Blimey, she’s all shaken up.

“S’kay, she’ll be right.” He grabbed her sleeping pallet, pulled it over, slipping an arm around her waist.

Her body went rigid. “What are you doing?”

“Relax, mate, I’m not trying to get a leg over. You need a bit of comfort so you can go back to sleep. My mum would cuddle me when I’d have a howler of a nightmare. It’s nice to know you’re not alone.”

“So, I’m supposed to think of you like my mom or dad?”

“Or like yer husband if that’ll help?” He grinned in the dark, wondering what kind of reaction he was going to get.

“I noticed you weren’t wearing a wedding ring. Is it because yer husband drowned?” His heart beat a little faster when he asked the question. He really wanted to know if he had a chance with her.

“No, he’s not drowned,” she snapped. “I lost my ring in the ocean, but I’m not sure when. I just looked down one day, it was gone.”

She’s in denial about her husband’s death. I reckon it’s too soon. A little disappointed, he decided to change subjects. “So, you got any ankle biters at home?”

“How old?” he asked. They must be missing their mum, poor little nippers.

“Joshua is twenty. He’s in college. Eli is eighteen and just graduated from high school.”

“Blimey, how long have you been married to your bloke?”

“Twenty-three years this January,” she said.

“How old are you?” He positioned his head where he could breathe in the scent of her hair, and inhaled a floral fragrance. How does she manage to smell fresh in a place like this?

Megan moved a bit forward. “Do you know that it’s considered very rude to inquire after a woman’s age?”

“Not where I’m from, so spill.” He scooted up some, placing his knees behind hers.

“You’re still spunky.” He wondered how far she’d move until she ran out of room in her tiny shelter.

“Uh, spunky, thanks.” Megan rolled onto her back.

Blimey, she out maneuvered me. Seth was forced to move back, but kept his hand on her tummy.

“You got hitched when you were a young ‘un?” He quickly did the math. She’s a bit older than me. More of a challenge.

“Yeah, I got married at nineteen, but I knew what I wanted, or thought I did. Have you ever been married?”

“What happened?” she asked. Her bed rustled as she shifted position.

“We got into a blue, she told me to shove off, so I left. So that was the end of that.” His hand drifted to her rib cage.

“Any kids?” she asked, pushing his hand down.

“Okay, now you have to tell me how old you are.”

“I’m an old prawn. I just had my thirtieth birthday.”

“That’s not old, especially not for a man.”

“I’m starting to feel it when I surf,” he admitted, smoothing a wrinkle on her shirt.

“Back in Uni I got caught up chasing the good breakers on Spring Break. I headed out from Cali to Baja, then from there to Florida. I became a Surfie. That’s what you’d call someone who surfs more than they work. Then I met this old bloke, Bill, in a pub. He’s from Oz too, or so I thought, but it turns out he’s an apple.”

“He hails from Tasmania. I was broke doing odd jobs. Bill hired me to help on his fishing boat.” 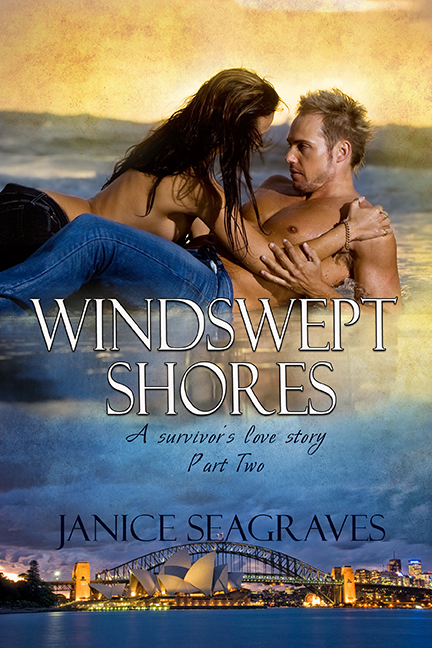 .
Megan and Seth are finally rescued off their little island, but things are far from idyllic. As they’re treated to one nasty surprise after another,  placing all plans of a wonderful future in jeopardy.
Will they ever get back together again or see the life they envisioned?

The next morning, Megan went to see Seth at the jail. The visiting area was small and it stank of pee and desperation. The bolted down metal chairs even more uncomfortable than the ones the day before.

“Megz, I thought you were going home?” Seth chided as she took the seat across from him at the old beat up wooden table.

“I have a flight in two hours. Time enough to see you before I leave.” She blinked back tears.

This is so unfair. This can’t be the last time I see him.

Megan folded her hands on the table. “We already checked out of the hotel, but I brought your luggage. The commissioner gave me the okay, so now you have a change of clothes for when you go in front of the judge. I also bought you a few necessities. Since soap and such are not provided, I was told it’s customary for family members to buy those items for the inmates.” She sat a white plastic bag on the table. “These have already been cleared for your use.”

He eyed the bag. “Did your boys pay for it?”

This is the last thing I can do for him, and he doesn’t want it? “Don’t you argue with me, Seth Dawson. You need these.” She fisted her hands. “I also put some money into an account here at the jail for anything else you might need.”

“Ta fer that, love. I’ll pay your sons back somehow.” Seth took one of her hands and uncurled her fingers. “I did want to see you one last time. I didn’t reckon with us parting this way. You to yer rotten bloke, and me here on charges.” He smiled. “Cuddling up on one of your siblings’ sofas sounded nice.”

“Crowded maybe, but we would’ve been together.”

“I heard you made a statement.”

“I did.” She sighed and looked down. I’m not sure what good it’ll do, Seth.

“Thanks for trying, love,” Seth murmured. “I don’t reckon on it being much since you didn’t know Bill before he died.”

“The commissioner said most of my statement is hearsay.” She shrugged. “The only thing I could really tell them was: Bill was dead when we found him and looked the same as the other drowning victims. Also, you never said a bad word about him and showed genuine grief at seeing his body.”

“Not much to go by.” Seth rubbed his thumb across her knuckles.

The slight touch sent a tingle through her, and she wanted to throw herself across the table at him. “The commissioner said he was going to contact the harbormaster where the Dinki-Di had been birthed to see if you two had gotten into any fights.”

“Maybe he’ll make a statement too.”

“Gawd, I hope so,” Seth said. “I don’t have enough character references, being from out of town.”

“And old Bill who’s gone.” He lifted her hand to kiss her fingers.

Megan stood and stared at Seth wanting to remember him. Not like this in the black and white jail clothes, but the way he was on the island, happily rumpled in his threadbare outfits.
~*~*~*~*~*~*~*~