Morgan isn’t expecting romance when she accompanies her friend for a week of skiing, but when she meets Jared all bets are off.
Haunted by the loss of his parents, werecat Jared Catterick earns his keep working for the Catclaw Clan. Jared has secrets that he doesn’t mind sharing with a special lady, and he hopes Morgan is that special someone. When his past and present collide it’s worse than he imagined, and he’s forced to fight for his life.

Auntie walked into the middle of the hollow. “We the Catcall Clan are gathered here together to witness a challenge. Called by Munch son of Tiger, who challenges Jared Catterick son of nobody.”

“I am the son of somebody,” Jared yelled. The sudden flow of anger had his heart pounding hard against his ribs.

“Who? What are their names?” Auntie crossed her arm and leaned on one hip and tapped a toe.

“I donna remember. I was too young when they killed them and took me away,” Jared muttered. “And she knows that.”

“Is Catterick your real last name?” Killer asked him in the canine speech.

“Aye. I donna remember much about me old life, but I never forgot me name.”

“Me parents were Mr. and Mrs. Catterick,” Jared said in a loud clear voice.

A few people around the hollow snickered.

Auntie gave a quick nod. “Jared son of Mr. and Mrs. Catterick. Munch challenges you for the death of his da, Tiger.”

Munch marched to Auntie’s side. He was every bit as big as his father. Well-muscled and not just tall but wide. Where Tiger’s hair was gray and white, Munch was blond and black. Another man accompanied him, his second, a tall, lanky male named Boyd. Jared knew him well, even though he was younger.

“Och. Here we go,” Jared told Killer and walked out into the middle of the hollow.

“And ugly. I wouldna want to ride him into battle.”

Killer stayed at his side. “Psst.”

“You can fight, right?” Killer asked.

Auntie looked at both males. “Jared, as the challenged, you may decide on weapons and forms.”

“Human and no weapons,” Jared said.

“Very well,” Auntie said. “You may use your feet, hands, elbows and knees. Even your head if you feel the need.”

“What aboot sticks and stones?” Munch asked, his voice youthful.

“Will break my bones,” Jared said under his breath.

“No weapons,” Auntie shook a finger at Munch. “That includes sticks and stones.”

“Well,” Munch crossed his arms, “since I canna change into cat form, I think I should be able to use whatever I find in the hollow.”

“This isn’t a free-for-all, Munch. There is discipline to a challenge. You must remain in your human form and fight like a human. With this match, we’ll have a square go.”

Auntie fisted her hands and leaned toward Munch. “You’re not a cat. You are a shifter. You shift between three forms. Now stay with one for the duration of the fight.”

“A bit daft that one,” Jared muttered back. Munch doesn’t seem have a lot of self-control. Unlike Tiger who would have done exactly what Auntie said to the letter.

“Seconds, to the side.” Auntie pointed. “You may view the fight only. Do not interfere unless your partner is hurt or someone breaks the rules.”

Both Boyd and Killer trotted to edge of the clearing.

Jared stood facing Munch. Several feet separated them. Jared shook out his arms, moved his head from side to side, and loosened his muscles.

Auntie raised her hand and did a karate chop between them. “Now fight.”

“I swear on me da’s grave, I will end you!” Munch roared and the skin on his face boiled. His hands burst out of his gloves and feet from his boots. The shift made Munch bigger, tearing his clothes. He stopped in the in-between state, like movie werewolves of old, but in this case half-cat and half-human. The only thing that remained of his clothes was his black overall snow pants and even that stretched taunt across him. Extending his claws, he snarled and reached for Jared. “I want to see you bleedin’.” 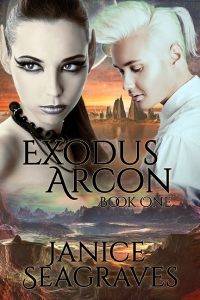